The Top 10 Biggest Cruise Ships in the World 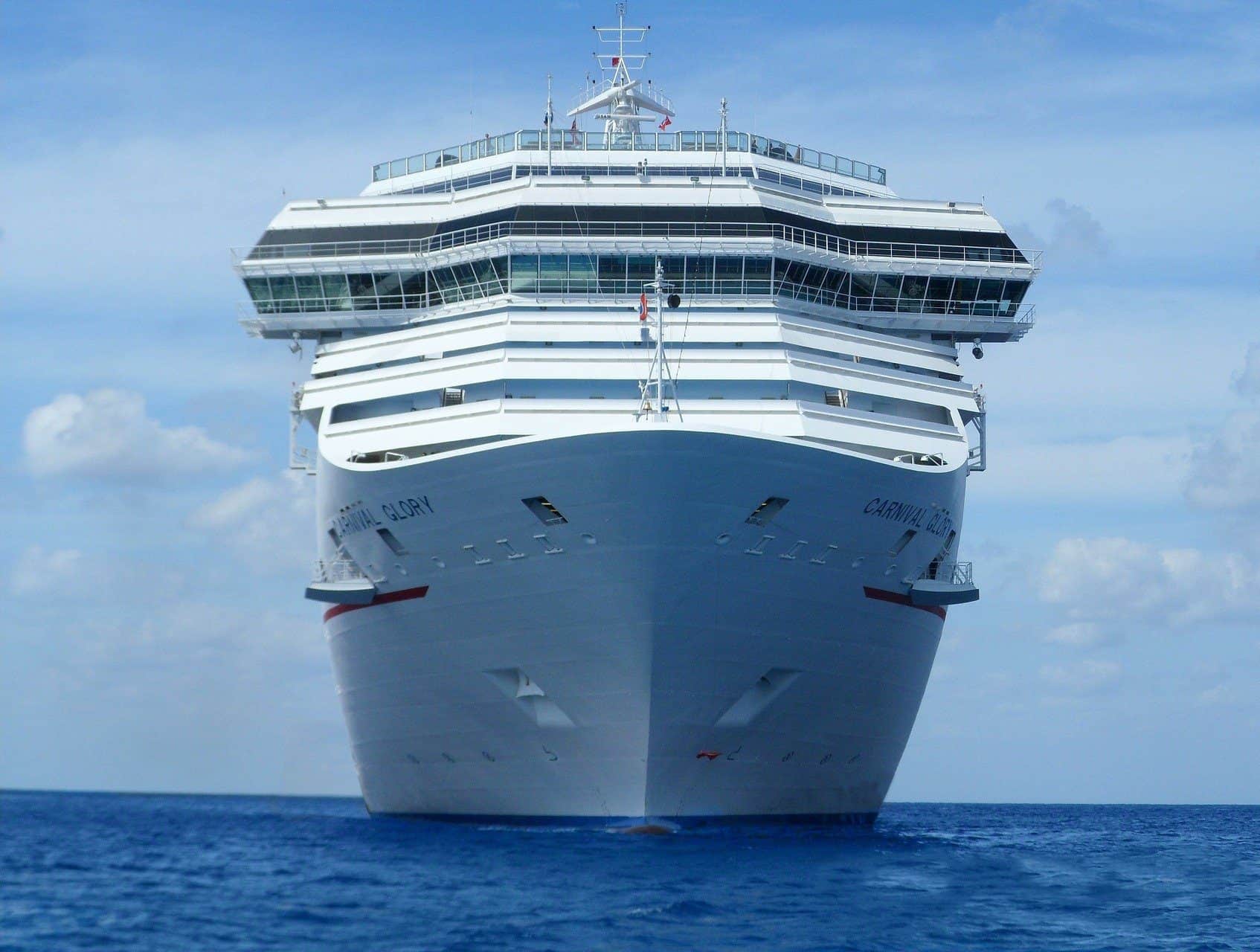 Cruise ships are rapidly increasing and seem to be getting bigger and better! More and more ships are being built with increased passenger and crew capacity. Bigger ships allow for more activities and facilities meaning cruise lines are able to offer cruise passengers increased choice. With many of the cruise lines taking on larger vessels, competition between cruise companies to offer the biggest, grandest and best ship is increasing also!

Here at Cruise the Waves we have complied a list of the 10 biggest cruise ships in the world which are out there sailing the seas. We are sure there are many larger cruise ships to come, which will really mess up our list, however, we believe it to be correct at the time of writing in February 2021!

The cruise ships listed are ranked in terms of their total tonnage and passenger capacity. Read on to see which one takes your fancy for your next cruise!

1. Symphony of the Seas

Taking the top spot as the worlds current largest cruise ship is the magnificent Symphony of the Seas owned by cruise line Royal Caribbean. This incredible ship first entered service in March 2018 and is part of the Oasis-class of ships. It holds an impressive 5518 passengers and 2100 strong crew.

The ship is the 25th ship in the Royal Caribbean fleet and is billed as a real family orientated cruise ship with a whole host of energetic activities and state of the art facilities. These include the FlowRider surf simulators, huge arcade, bionic cocktail maker and even glow in the dark laser tag. Guests love the thrill-seeking Ultimate Abyss which is a 10 storey high water slide. Not for the faint-hearted! 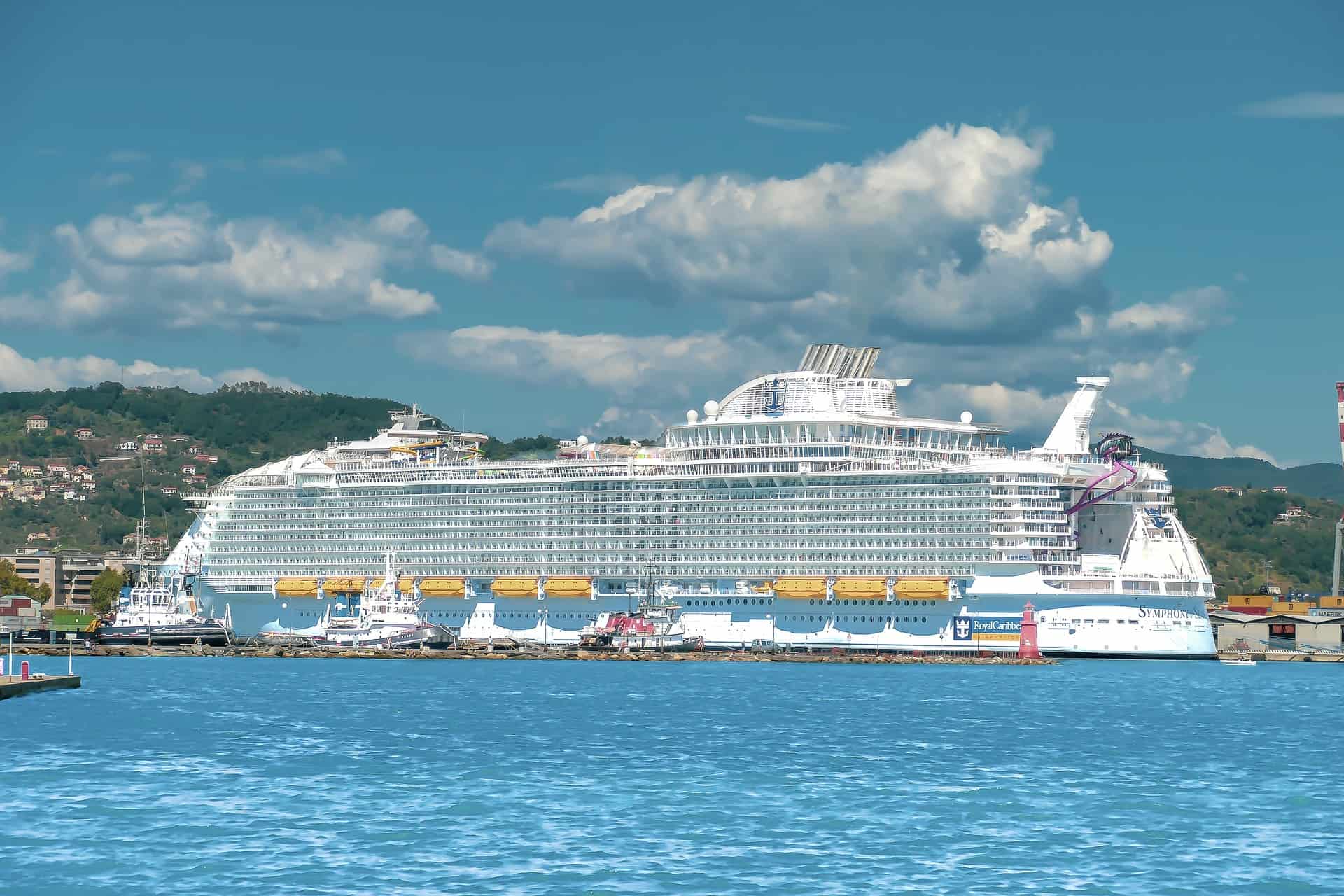 2. Harmony of the Seas

Currently, the second-biggest cruise ship in the world is Royal Caribbean’s Harmony of the Seas which is another Oasis-class ship. This ship is 2 years older than the Symphony of the Seas having entered service in May 2016. It only just takes second place though, with it having a huge capacity for 5480 guests and a 2100 crew (same as the Symphony).

As with many of the other Royal Caribbean vessels, it has features including Central Park, the Ultimate Abyss slide, Boardwalk and Vitality Spa. We would certainly not say no to a cruise on her that’s or sure! 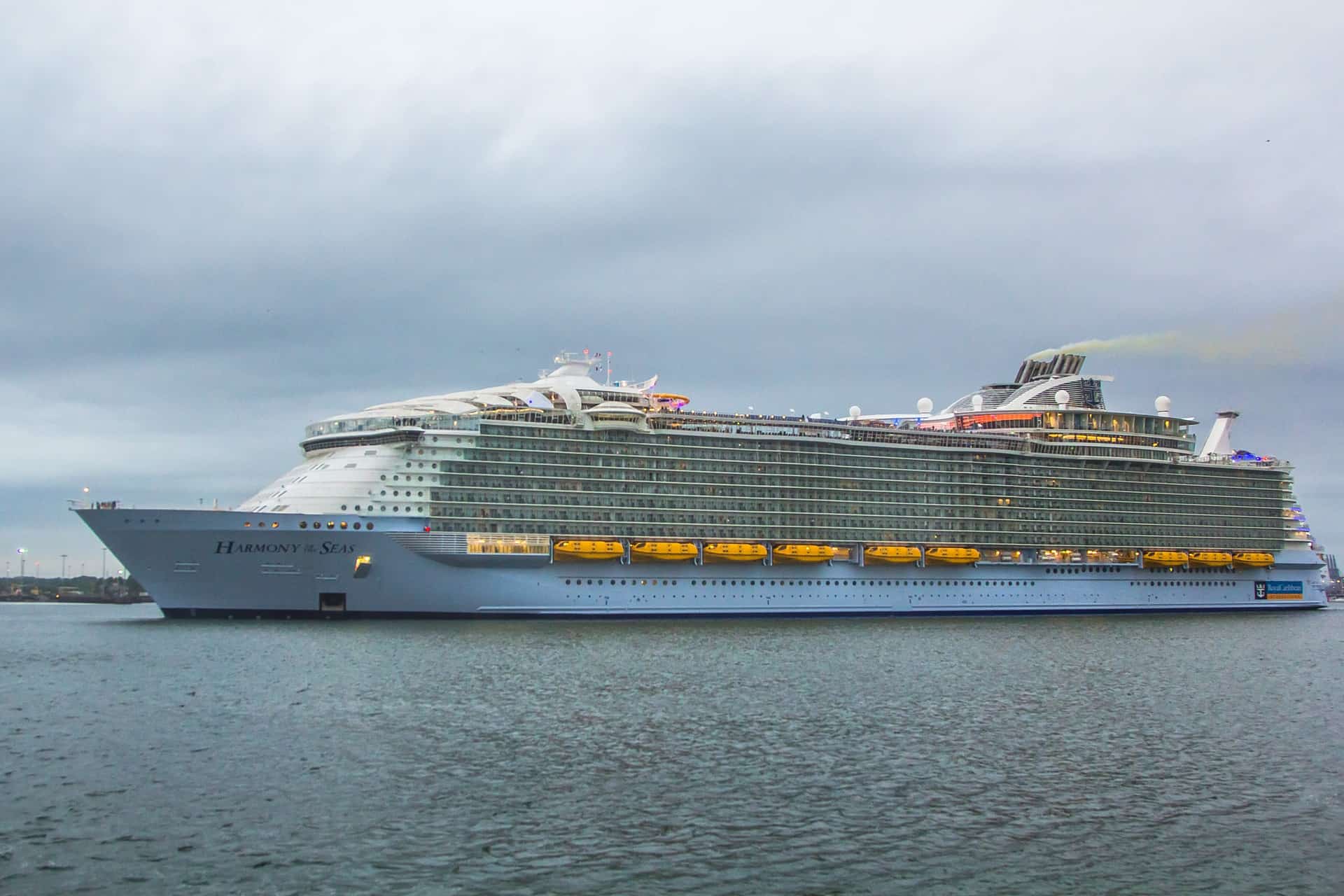 3. Allure of the Seas

Another of the Royal Caribbean Oasis-class ship takes the third spot (I sense a theme developing here!). The Allure of the Seas was delivered in October 2010 and features the awesome looking AquaTheater and even a zip line – yes you read that right – a zip line on a cruise ship! Guests are able to buckle up and zip along the length of the ship, and its included in the cruise fare so you can do it as many times as you like! If that’s not for you then maybe the ice rink is!

With 18 places to eat and 13 bars, there’s so much to explore on this ship and even on a two-week cruise, you’d be hard-pressed to try them all out! The ship has a capacity of 5400 passengers and 2384 crew members. 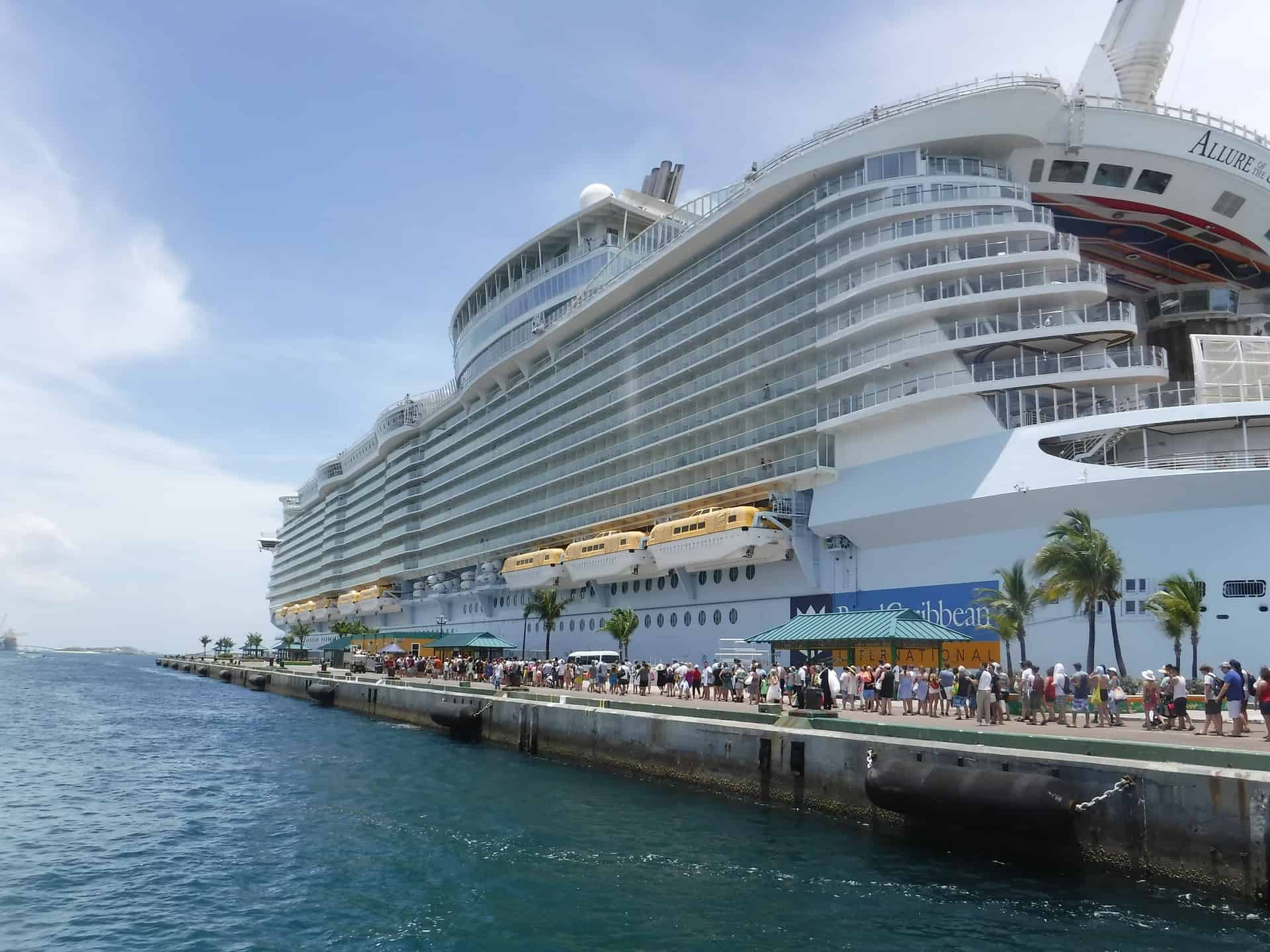 4. Oasis of the Seas

Up next is another of the Royal Caribbean ships the Oasis of Seas which was the first ship within the Oasis-class of ship. It has 5400 passengers and 2394 crew members and first entered service in 2009. It was the first Royal Caribbean vessel to include the Aqua Theater and zipline and the huge Central Park feature. These all helped to boost the cruise industry to a new class of ships and I can imagine made the other cruise lines green with envy!

Oasis of the Seas has 16 passenger decks so is blooming tall! It has 5 pools with an awesome water park area that includes the Perfect Storm waterslides and Ultimate Abyss – the tallest waterslide at sea. There are various escape rooms on offer too for those who prefer something a little less wet and wild! 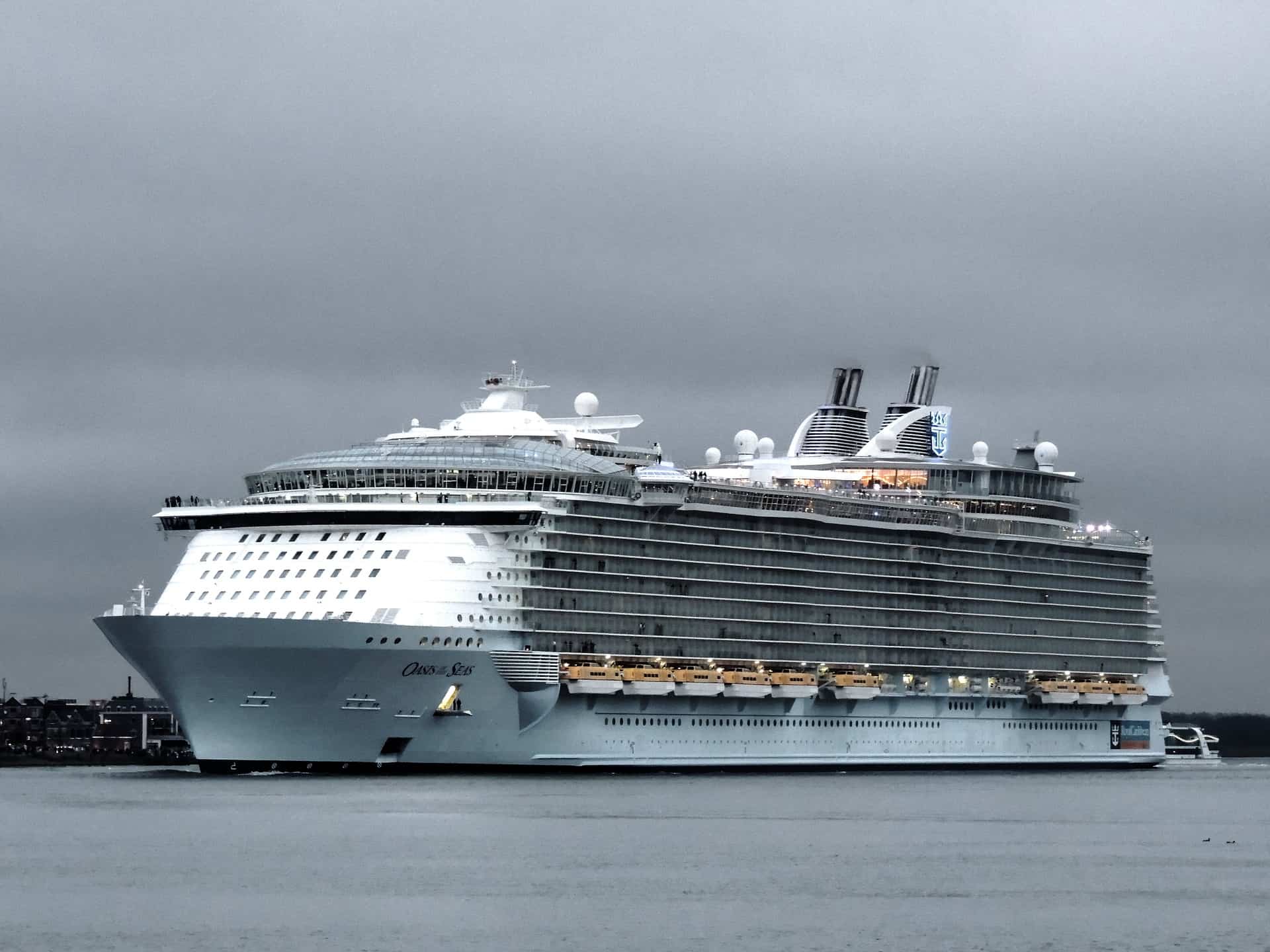 Next time at number 5 is a different cruise line! Wahoo! The Costa Smeralda is Costa’s biggest ship and can carry an impressive 6554 passengers and 1646 crew members – that’s so many people!!

Costa Smeralda is revolutionary for Costa as it’s their first cruise ship that is powered by Liquified Natural Gas (LNG) and was designed using different sustainable technologies to reduce passengers carbon footprint. It was delivered in December 2019 so is still only a baby really!

The ship features 1628 balcony cabins and 11 restaurants. It even has a 1804.46 square foot shopping area should that interest you! It has a real Italian feel to it and is named after the Emerald Coast of Sardinia. Guests will feel they are truly in Italy with the heart of the ship being called the Colosseum and their various Italian named restaurants and bars. We love Italy and so this would certainly appeals to us! 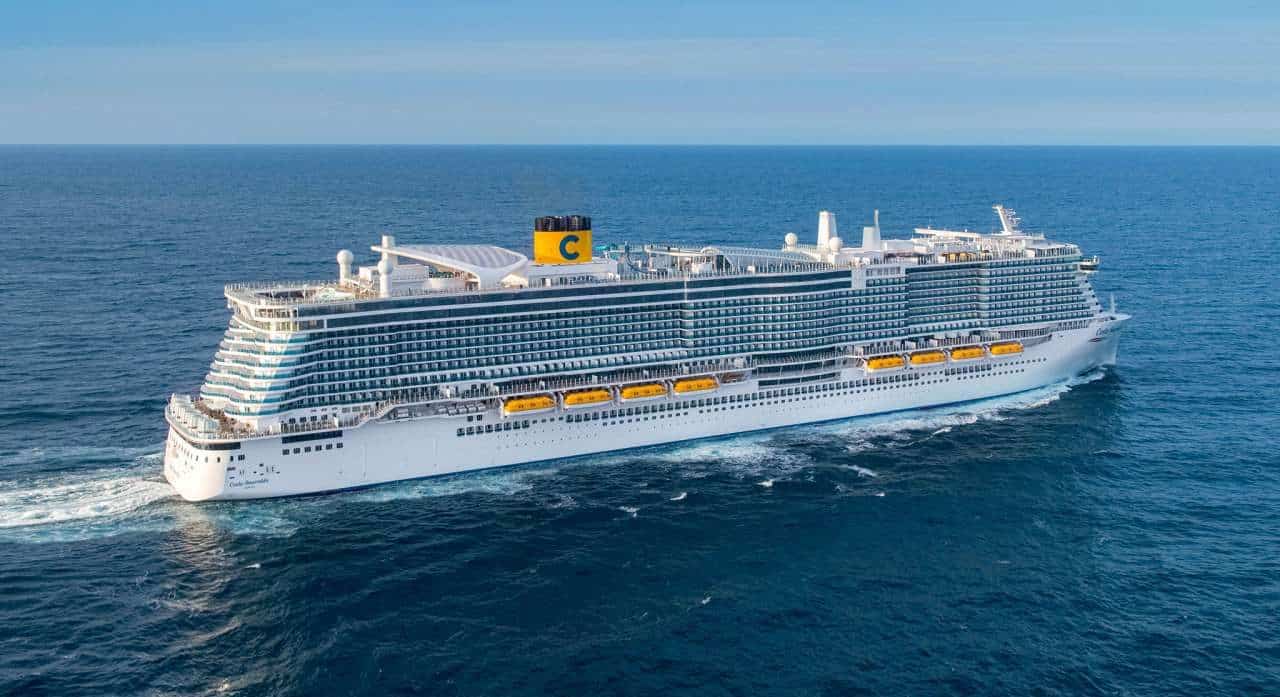 Taking the 6th spot in the list of the worlds largest cruise ships is the Iona, operated by cruise line P&O. This ship is virtually brand new having been due to start its operation in May 2020. Of course, as we know, that little something called Coronavirus has baldy affected the cruise industry and thus delivery of the Iona didn’t happen until October 2020.

The Iona certainly has a lot to offer its passengers including the Ocean Studios – a four-screen cinema complex, a sports arena including golf swing nets and archery, and the 710 Club – an exclusive live music bar inspired by none other than Gary Barlow! We are sure that when she is able to sail she won’t disappoint the 5200 guests onboard!

As with the Costa Smeldra mentioned above, the Iona is LNG powered, making it the first for P&O. We hope she sets sail very soon! 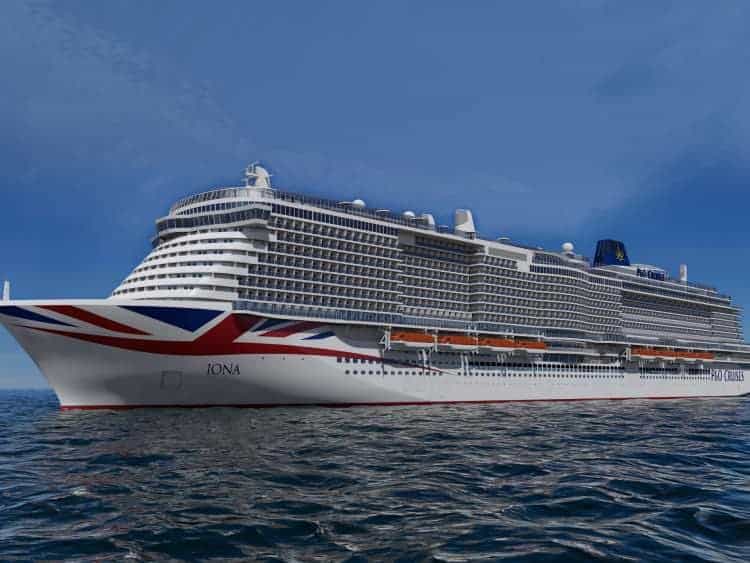 In 7th place is the Nova which is operated by the german based company AIDA cruises. The Nova is another of the recently built vessels that are fully powered by LNG and boast a 360-degreeTheatrium and even a TV studio! The 6600 passengers on board are able to choose from 20 types of staterooms and enjoy a luxury spa spanning two decks. This all sounds perfect to us!

The AIDAnova has a crew of 1500 and entered into service in December 2018. We just love the outside of these ships with their big painted eyes and lips – it makes them instantly recognisable.

There are 2 ships that take 8th place in this list and they are the Grandiosa and the Virtuosa, both owned by MSC Cruises.

The Grandiosa is slightly older, having been launched in November 2019, with the Virtuosa being delivered very recently in February 2021. It is hoped that the MSC Virtuosa will set sail around the Mediterranean in April 2021 but who knows if it will be able to with all the pandemic crisis continuing to disrupt the cruise industry.

Both ships have state of the art facilities and the Virtuosa has the world’s first humanoid robotic bartender at sea – this one has to be seen to be believed right! It also boasts the Galleria Virtuosa which is an indoor promenade featuring 11 posh boutiques and 1168 square meters of retail space. For us we don’t tend to do a lot of shopping on a cruise – that’s not top of our priority list – but I bet we would enjoy having a nose around if we were lucky enough to be on board!

Both the vessels can carry an impressive 6334 passengers and have 1704 crew members each. 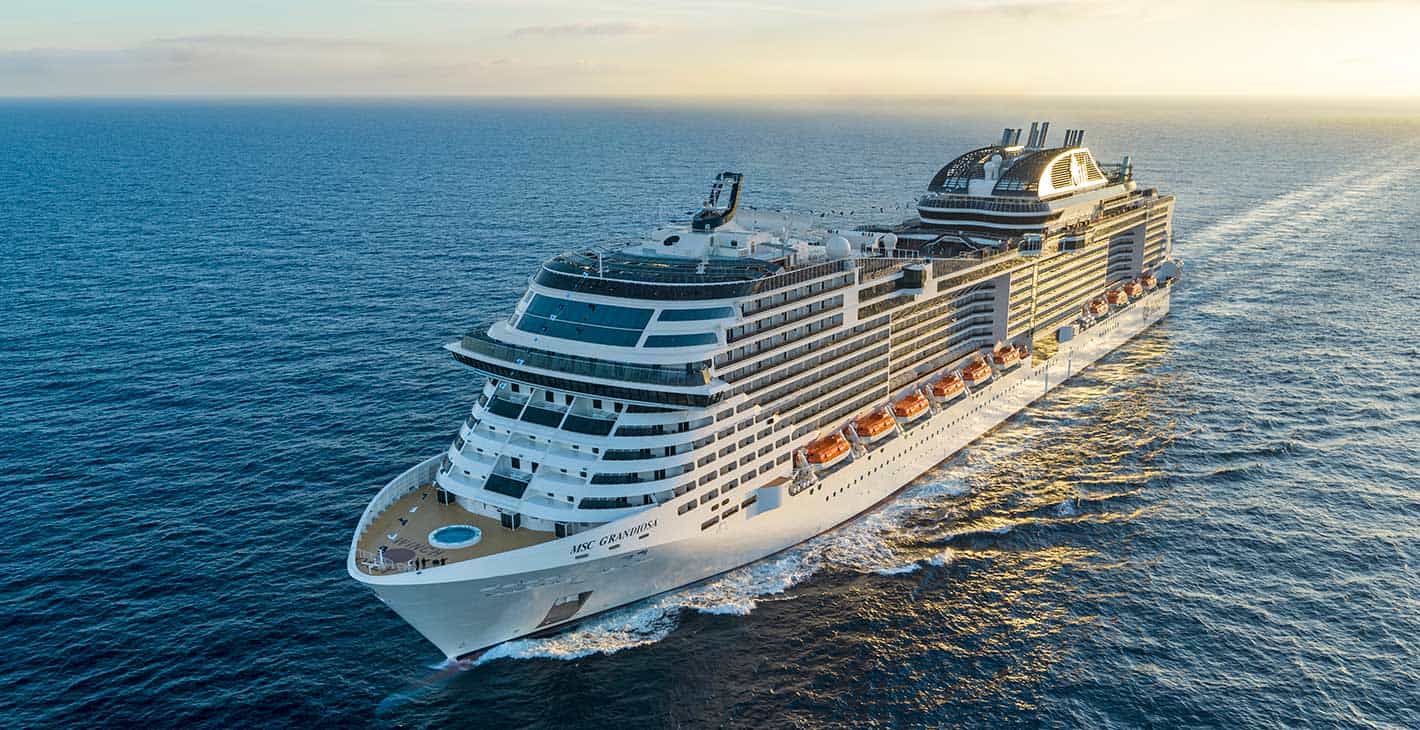 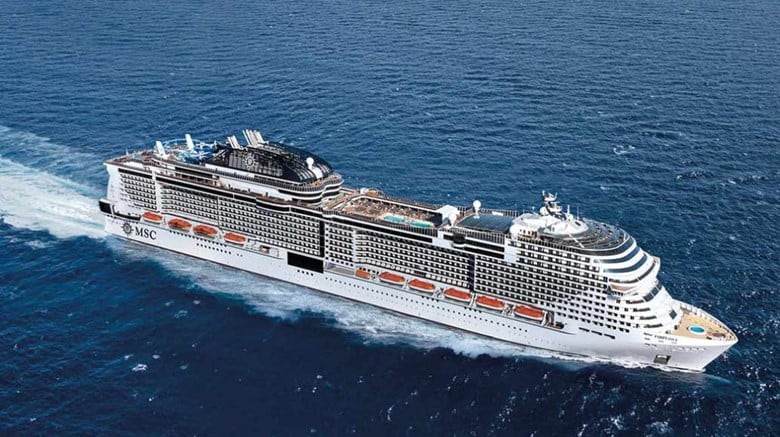 The number 9 spot introduces us to another cruise line – Carnival Cruises Lines and their biggest ship the Mardi Gras. Carnival Cruises is the world’s largest cruise line and the Mardi Grass is the first XL-class ship within their fleet. The ship is the first LNG vessel for Carnival and means they join some of the other popular cruise lines mentioned above in offering more sustainable cruising. It is also special to Carnival for another reason in that it is a tribute to the first-ever cruise ship of the company.

You may also have heard of the Mardi Gras as it is the first ship ever to have an inbuilt rollercoaster on board! The BOLT rollercoaster, or should we say seacoaster, will see cruise passengers speed along the tracks in a cart high above sea level with incredible ocean views. An even more unique feature is that passengers will be able to control how fast the ride goes so the choice is yours as to the thrill factor! We both love rollercoasters and so I am sure we would love to give this ago; although I reckon we would be rather nervous!

The magnificent Mardi Gras was built in Finland during the Covid-19 pandemic and was delivered to Carnival in December 2020. It is due to set sail in April 2021 so fingers crossed!! 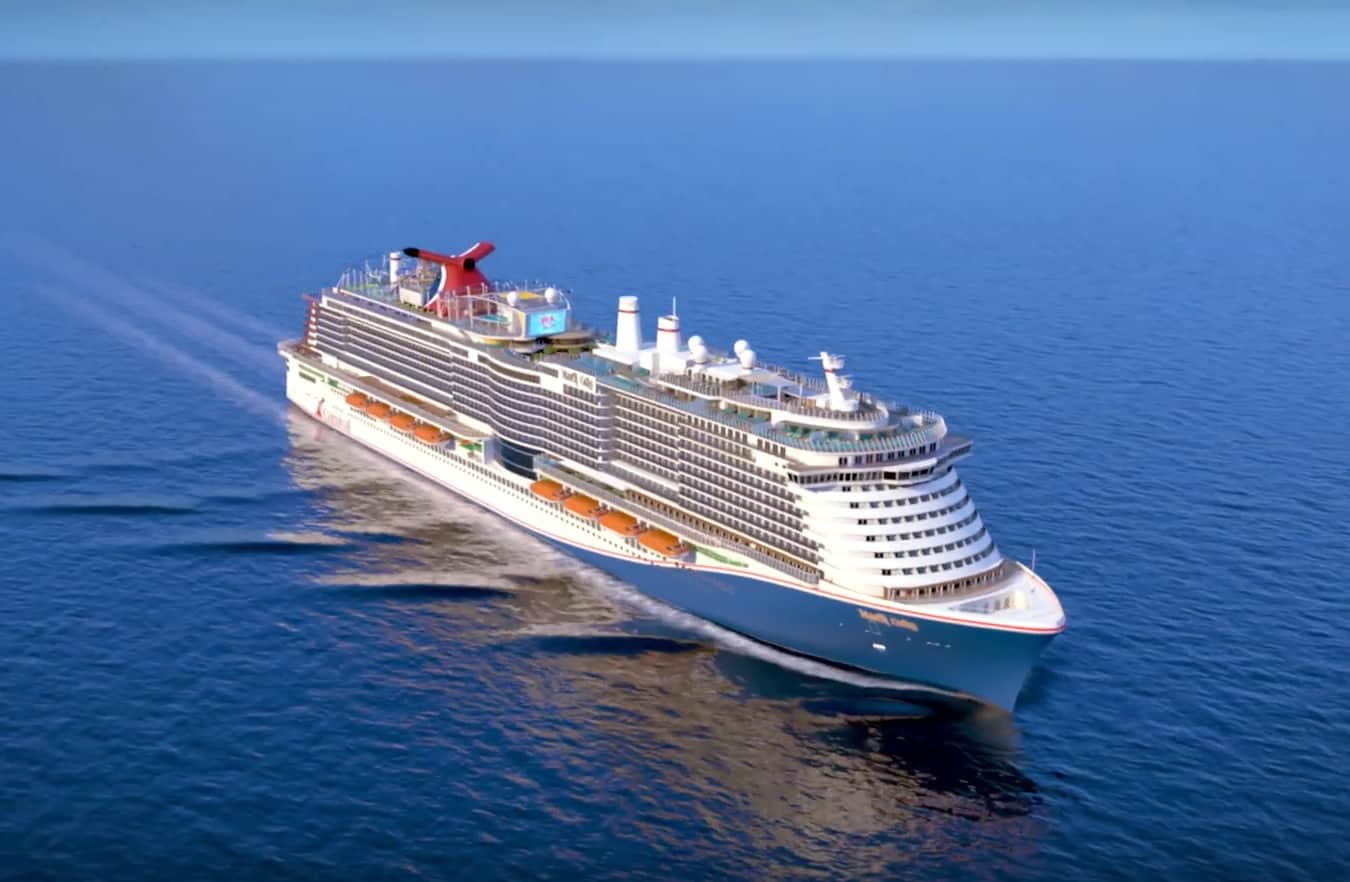 So the last two ships on our list are the Meraviglia and Bellissima owned by MSC Cruises. Both being the same size and offering the same passenger capacity these ships are the joint 10th biggest cruise ships in the world. They both have the capacity for 4500 passengers.

The MSC Meraviglia came first, with it being delivered in June 2017 and later followed by the Belissima which debuted in March 2019. The Meraviglia features a two-deck inside promenade with a 480 square metre LED dome. The newer Bellissima is equally as beautiful and offers the worlds first digital cruise assistant ‘Zoe’ which is a voice-enabled artificial intelligence device fitted into each cabin! I guess its different from constantly shouting ‘Alexa’ when at home! 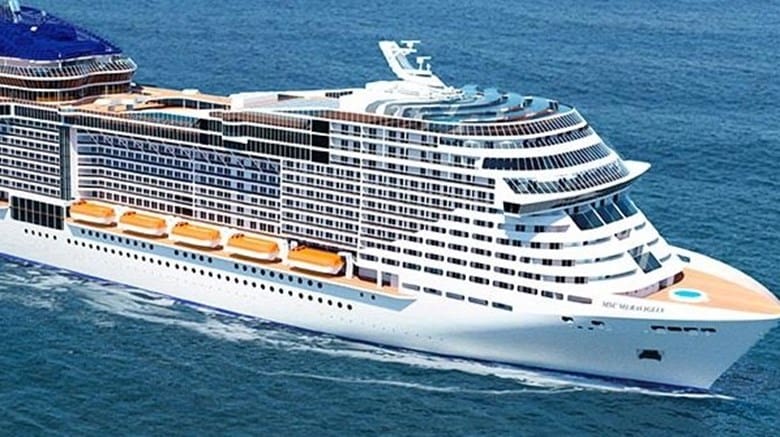 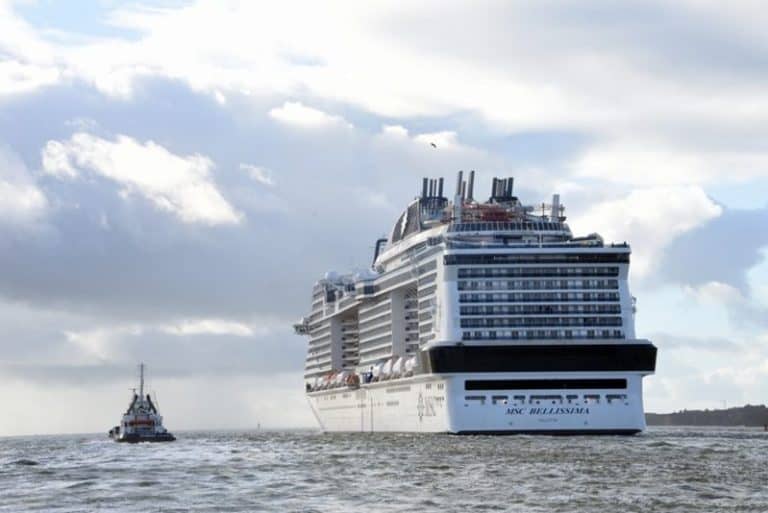 So there we have it, the top 10 largest cruise ships in the world and bloody impressive they are! It seems like these new class of cruise ships demonstrates cruise lines moving in a direction of ‘bigger is better’. The competition to be the biggest and best cruise ship is really real among the cruise lines and each appears to be trying to outdo the other. All of these ships are pushing new technological and sustainable boundaries and offering such a range of activities and features that cruising really has got to be the best holiday out there!

We love the sound of playing archery on board, riding rollercoasters and sliding down huge water slides and think that what these ships offer is just incredible really- you almost forget that they are floating on water! Although we have to admit the concept of the bionic bartender scares us slightly – could this be the future for all crew onboard one day?! With so many of the newer cruise ships having ice rinks, laser tag, dodgems, huge theatres and even a rollercoaster, we can’t imagine what else there possibly is to put on a cruise ship!